Hey, guys! Today I’ll be doing a collab with the one and only: Diamond!! If you haven’t already, make sure to check out her two AWESOME blogs: Build A Bears Furever, and I Have 12% of a Plan.
So basically, Gifoo is going to be giving Mischief a prank, and vice versa. Then you’ll watch it unfold! Err, read it. Her part of the collab is linked here. man so many links Also be sure to check out the other awesome posts from the collab week she coordinated on her blog!!

I’m sorry my post is out a little late 🥺
Anyway, over to Gifoo!

I couldn’t wait to finally meet Mischief.
Obviously, no one could be as good at jokes and pranks than I, but I was curious to find out what he was like. And, of course, what his prank for me was.
Finally, Aspen came over with his laptop. I don’t have my own yet, so I have to rely on him.
Oof.
Aspen gave it to me, and left. Perks of living closeby, amirite? Zoom clicked on, and there was Mischief! 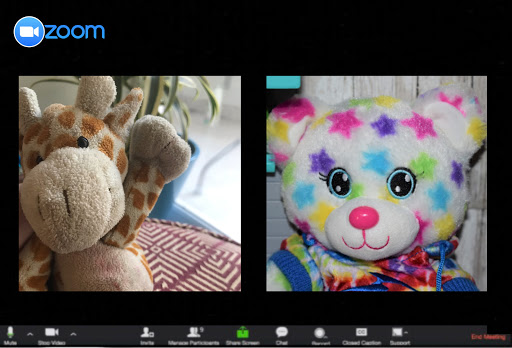 Me being me, I took the initiative.
“Hello, hello, Mischief!! Can’t wait to tell ya my prank. It’s awesome – obviously,” I said. “So what I want you to do.. mix glue into a bottle of sanitizer, and next time you go out, make sure your friends/sibs use it.
Isn’t it just amazing? Have a fun time pranking!”
I smirked, sure he couldn’t top that. I mean, I’ve obviously pulled off much better ones before, but I wanted to go easy on him.

“Gifoo, your prank is to make some cupcakes, frost them with mustard, and serve them to your stuffie friends,” he told me, doing an evil sorta laugh. “I look forward to seeing everyone’s reactions.”
I have to admit: I was a little impressed. Course’, it’s an easy and simple one, but I hadn’t done that myself. At least, not with mustard. I had already started making plans in my head: who I’d share it with, how many I’d make, etc.
Me and Mischief ended up talking about some of our previous pranks.
Eventually, we clicked off.
Well, really it was Aspen. He called me to say he needed it. But we’re ignoring that part.
I got out my notebook, and wrote down what I needed to do. I, err, have a kind of bad memory. *cough* sometimes.
I asked my dad where we kept the cupcake things. I had almost no idea how to make them, and I had no idea where we kept the thingies either.

He sighed. “Gifoo, what do you need it for this time?”
I had to stifle a laugh. I remembered that one time I used the cupcake batter to dump it over Ellie’s head.
Hey, no judging. I was only six then.
I remembered that dad was waiting, and replied, “I wanted to make something for Kit and Aspen! They’ve been especially nice to me lately.”
Hey, it was true. I was making them for Kit and Aspen. Just.. not because they’re being nice to me.
But my dad believed me – kind of.
“Okay.. but I’m going to be supervising you,” He said.
What?!?! He couldn’t supervise me! How would I ice it with mustard then?! Hmm… I had to figure out a way to, eh-hem, get rid of him. NO OFFENSE DAD!
He watched me make the batter. I made sure to do it extra slowly, so I’d have enough time to form a plan.

Ah, I got it.
I’ll speed the process up: made da’ batter, put it in a tray, put it in the oven, poked one with a knife after 30 minutes or somethin, pulled it out, blah blah blah.
I pulled out the real icing – yellow, of course – and made a big show of putting it in the icing cone-bag thing.
And dropped some on myself.
It was part of my plan! You won’t believe me? Well, just hear this next part.
Dad had to take my shirt for laundry. And, like I knew he would, he ended up being distracted by something.
And forgot to come back to supervise me.
And I iced the muffins (cupcakes, whatever) with mustard.
Part one of prank is a go!
Now all I had to do is get Kit and Aspen to eat this junk.

Fast forward to later that day: Kit was at my house, Aspen on his way.
I didn’t want to make em’ sus.
And naturally, I knew how to do that.
We chatted for a while.

“How was your call with Mischief, Gifoo? Finally found a prankster better than yourself? Or maybe Kit, at the very least?” Aspen said, half-grinning.
“HEY!” Kit shouted at him. “I’m a much better prankster than you anyway, Mr. I-don’t-have-time-for-jokes!”
I laughed, remembering the phase where all Aspen did was play basketball. He was ridiculously haughty back then, and just couldn’t understand a good joke. “Um, anyway, Mischief was pretty awesome. He may be as good as me when it comes to pranks. Almost,” I admitted. The two raised their eyebrows, but said nothing.
And that was when I brought up my cupcakes.
“So, guys, he also dared me to make some cupcakes.”
“And you did?” Aspen asked. He doesn’t know me as well as Kit. I never decline a dare.
“Course’! I even made a couple for you guys! See, I’m sooo generous,” I replied.
“Sure. Extremely generous,” Kit said, rolling her eyes.
I went and grabbed the cupcakes. I couldn’t wait to see their faces! Trying to keep the smile off of my face, I carried the plate back.

“Cupcakes for everyone!” I cheered. I had been worried the mustard would look off, but I could see that they didn’t realize a thing. Phew. They both took a cupcake.
“GAH! What is this, Gifoo?!” Kit said first. Aspen, who hadn’t yet taken a bite, watched with a puzzled look.

I had my answer prepared. “Aw, is it that bad? It’s my first time making em’, so I guess my awesomeness hasn’t come through in this batch. Whoops.”
Kit looked unconvinced, but Aspen took a bite. He spit it out two seconds later. “Um.. Gifoo.. This is terrible!” He said, running to the kitchen for a glass of water. Kit inspected the cupcake. She didn’t get as affected from the weird taste. “Hmm… the base looks alright.” She sniffed it. “What the heck did you put in this? Smells like mustard or somethin’”
I fidgeted.
Kit sniffed it again, and licked it. She looked up with a half-glare, half-smile. “Aspen… he mixed mustard in the batter.”
His eyes widened as he walked back in, gulping furiously from his glass. “Seriously? I thought I had been poisoned! Not funny, Gi, not funny.”
“Don’t call me that, Pen. Don’t you dare call me that. And for the record, the frosting is mustard. I didn’t mix it in the batter.”
“Oh! Well, apart from the fact you fricken poisoned me and Pen, I suppose it was a good prank,” Kit said. I knew she’d see the bright side!

Aspen, however, was not convinced. “I’ll get you back for this,” he snarled. “Oh, who am I kidding. You won’t let me. BUT DON’T YOU DARE DO IT AGAIN!”
Me and Kit started laughing, and slowly, Aspen joined in too.

Later, I told them about my prank exchange with Mischief. Kit was a teeny tiny (okay, a lot, but don’t tell her I told you that) bit hurt she wasn’t part of it, but she got over it.
“I can’t wait to find out what Mischief did with your idea! After all, I gave it to you,” she said.
“Oh really?” Aspen replied.
“Nah, I found it in my ‘Easy Joke Ideas for the Best of the Best’ book,” I said.
Kit crossed her paws. “Which I gave you.”
“Oh. Right.” I grinned sheepishly.
We talked for a while. I told them about the pranks Mischief told me about on our call.
Since I’d gotten so many ideas, Kit wrote them down and handed a copy to all of us.

But anyway, that was how my prank went, Mischief! I can’t wait to hear about your day.

Best giraffe ever, Gifoo, is out!

~beware of the rat~ Sarcasm, jokes, weirdness, fangirling, and awkwardness all come along with me~ just making sure you're aware of that before you proceed. *waves awkwardly* Hey, people, elves, demigods, witches, wizards, crows and all! 👋 'Tis Rayna, an 11-year-old girl who loves reading, blogging, drawing, and playing my 'lil ukulele. 😌 p.s I have a t o n of nicknames, the most used ones being Georgie, Ray, Rat, and Rayns, so take your pick. Or make another. I don't mind. View all posts by Rayna

This site uses Akismet to reduce spam. Learn how your comment data is processed.